Second Liberation icon Kenneth Stanley Njindo Matiba is dead. Matiba, who is remembered for his crusade for the re-introduction of multi-party democracy in Kenya in the 1990s, passed away at the Karen Hospital after a long illness.

The former opposition leader had been hospitalized at the Karen hospital’s ICU for the last 55 days, after suffering a cardiac arrest. He had been placed in a ventilator for the last 14 days.

Muranga Governor Mwangi Wa Iria through his facebook mourned Matiba describing him as a revolutionary and spirited leader.

“His fight, contribution and commitment towards a better republic can neither be redacted nor be ignored. Because they hang like a halo in our nation’s history. We can only repay him by remaining true to the ideals he so much believed in and worked for” He noted.

The political veteran who suffered a stroke in the early 90’s while in custody has been on and off for various health related conditions. 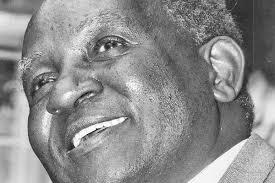 Matiba was detained with other politicians for agitating for the return of multi-party democracy during former president Daniel arap Moi’s tenure. As a result of his condition while in custody, the court ruled that his medical situation, “greatly affected the business acumen, attention, focus, energy, guidance and leadership he was giving his companies that without him at the helm, they deteriorated and some eventually collapsed.”

Matiba was the architect behind a 2 day nationwide general strie in 1992 that made former president Daniel Moi give in to pressure to officially allow political rallies. This then ushered the first multi-party democracy elections.

The former Kiharu legislator came close to clinching the presidency in 1992, emerging second in an election that was largely viewed as not free and fair.

In late 2017, the former cabinet minister was awarded Ksh 504 million as settlement for a case against the government of Kenya as compensation for his detention and torture by the state in 1990.

The figure was later revised to Ksh 945 million after it emerged that there was an error in the calculation.

He will be remembered for standing up against an authoritarian regime keen on clamping down on dissenters at a time when it was a great risk to his life.

Report: Kenya among best places to visit in 2018

Report: Kenya among best places to visit in 2018

No Result
View All Result